On September 17, 2018, University of the Philippines President Danilo L. Concepcion signed Proclamation No. 1, Series of 2018, declaring September 21 every year as UP Day of Remembrance.

The Day serves to commemorate members of the UP community who stood at the forefront of the resistance to Martial Law during the administration of President Ferdinand E. Marcos.

The commemoration also serves to highlight the University’s role as a champion of academic freedom and as a beacon for hope and an advocate of human rights during the darkest days of democracy in the country.

The Day is intended to remember the sacrifices and legacy of UP heroes, the living and the fallen, and to impart their stories to younger generations of Iskolar ng Bayan and other patriotic Filipinos.

Recently, the Day has been expanded to a series of days which will allow for more online activities and substantial discussions on the impact of Martial Law to the country and its people.

Signing of the UP Day of Remembrance Proclamation 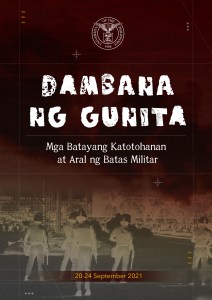 The 50th anniversary of the declaration of Martial Law in the Philippines and the upcoming national elections call for historical awareness from our voting populace.

Once again, the University of the Philippines (UP) honored the struggles of the Filipino people under the authoritarian regime and commemorated the University’s contributions in the uprising against the Marcos dictatorship through the UP Days of Remembrance.

Five educational webinars brought out the truths and debunked myths about Martial Law and the Marcos regime. Each webinar is interspersed with artistic and musical performances that illustrate the socio-cultural milieu of the era.

Faculty and researchers from across the UP System, scholars from outside the University and overseas, and human rights activists and progressive artists spoke about the realities of Martial Law based on their own experiences and studies.

This year’s presenters and performers enshrined the names and struggles of the University’s best and brightest who fought, struggled, and made the most extraordinary sacrifices in the name of freedom and democratic ideals.

Read more: Truths and lessons of Martial Law to be discussed in the week-long UP Days of Remembrance

Related story: UP Days of Remembrance to shine a light on the myths and misinformation on Martial Law and the Marcos regime 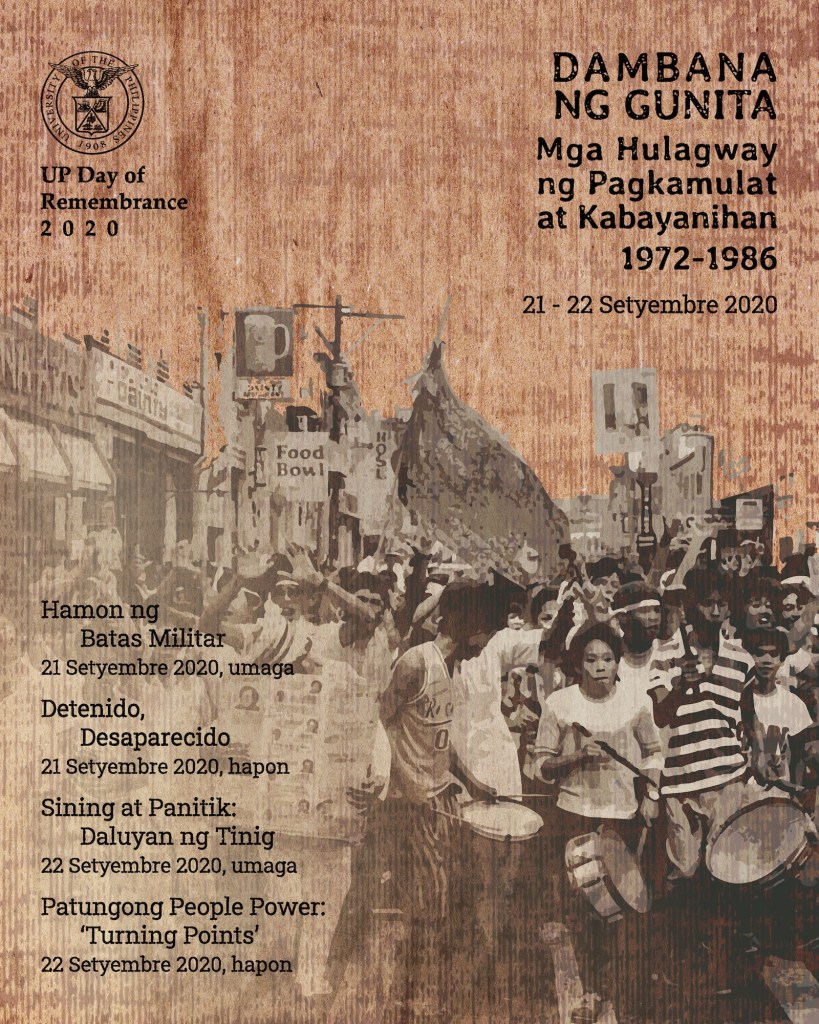 2020’s UP Day of Remembrance, titled “Dambana ng Gunita: Mga Hulagway ng Pagkamulat at Kabayanihan 1972-1986,” consisted of two main activities: four webinars featuring UP alumni and faculty who fought during Martial Law sharing their experiences; and, an online exhibit to feature Martial Law narratives of resistance and hope that continue to resonate up to now.

These online activities were held across all eight UP constituent units, and revolved around four themes: Hamon ng Batas Militar, focusing on the early years of clampdown on civil liberties and adapting to the situation with new forms of struggle; Detenido, Desparecido, a remembrance of the Marcos regime’s violation of human rights and cruelty through disregard of due process, indefinite imprisonment, torture, disappearances and killings; Sining at Panitik: Daluyan ng Tinig, recalling writers and artists who created new forms of expression, inspiring and mobilizing the masses for action against deception; and, Patungong People Power: Turning Points, on the events in the 1980s that became turning points which led to the end of the Marcos dictatorship.

In pursuit of its tradition of struggle for academic freedom and democratic ideals, UP stood at the forefront of the resistance to Martial Law and the Marcos regime, contributing to this struggle many of its best and brightest. UP deemed it proper to enshrine their names and struggles for younger and future generations of the University to emulate. It is for this reason that UP President Danilo L. Concepcion signed Proclamation No. 1 in 2018 declaring September 21 of every year as UP Day of Remembrance, during which special lectures, meetings and ceremonies will be held across the UP System to commemorate UP’s participation and sacrifices in the struggle against dictatorship and tyranny.

The UP Day of Remembrance 2020 is made all the more significant as the University commemorated in February this year the 50th anniversary of the First Quarter Storm, which led to the Diliman Commune and other watershed events prior to the declaration of Martial Law. 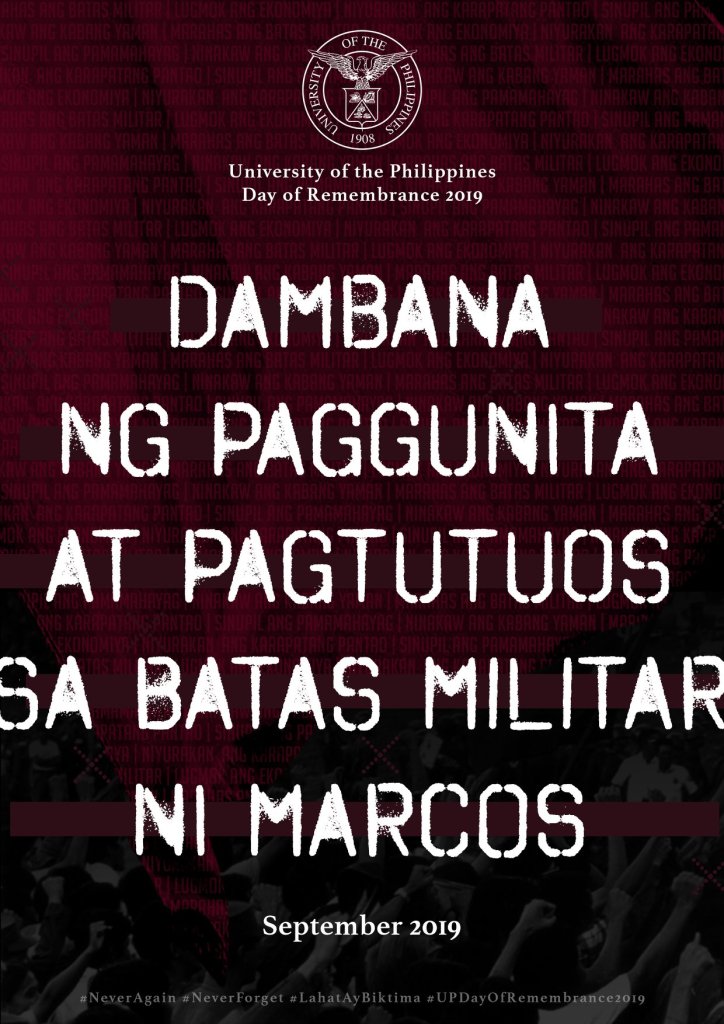 Pre-event activities started on September 16 with the airing of Lakad Gunita sa Pamantasang Hinirang, a documentary video, on both TVUP and the University of the Philippines online channels to kickstart the weeklong campaign. The documentary highlighted key landmarks in the Diliman campus that became hotbeds of activism: Quezon Hall, Palma Hall, Vinzons Hall, Melchor Hall, and Kamia and Sampaguita dormitories which all stood witness to the events of the First Quarter Storm and the Diliman Commune.

On the actual Day of Remembrance on September 19, an opening ceremony was held at the AS Steps (Palma Hall) in UP Diliman, accompanied by the unfurling of streamers across the hall bearing this year’s central messages. Danas, a series of performances recreating and commemorating the martial law experience was featured as street art, ensuring access to the widest audiences. At the center of the performances, a Dambana was set up by students and faculty of the College of Fine Arts. A free premiere screening of TVUP’s Lakad Gunita sa Pamantasang Hinirang capped the year’s Day of Remembrance.

The following day, martial law-themed films were screened. Among these were Liway and Portraits of Mosquito Press, and the documentary 1081. The screening was followed by a forum on Media, Martial Law, and Human Rights with journalist Ceres P. Doyo and artist Boni P. Ilagan.

Read more: UP Day of Remembrance 2019

Highlights of the Day of Remembrance 2019

UP marked the first UP Day of Remembrance by concretizing plans to construct the country’s memorial for victims of human rights violations during the Marcos regime.

Sa araw na ito tayo ay nagpapasya na ikintal sa puso at damdamin ang dakilang alaala ng mga araw ng pakikibaka, ng mga taong nagsakripisyo at nagbuwis ng buhay, upang ito kailanman ay hindi malimutan at hindi na maulit pa (On this day, we decide to commit the legacy of the days of struggle, of the many who sacrificed their lives; so that they will never be forgotten and [their fates] never repeated),” Concepcion added. “Ito ang ating dasal, ito ang ating banal na panata (This is our prayer, this is our sacred promise),” he added.

Four days before the MOU signing, Concepcion signed a proclamation designating September 21, 2018 and September 21 of every year thereafter as “UP Day of Remembrance” in honor of the sacrifice of the University’s “best and brightest” for the struggle against dictatorship and despotism, many of whom died resisting the abuses of the Marcos regime.

Read more: UP holds first Day of Remembrance, commits site for martial law memorial
Related reading: Memorial for victims of the Marcos regime to rise in UP

Highlights of the Day of Remembrance 2018