Without academic freedom, the University of the Philippines (UP) would lose its meaning and purpose.

This was the statement issued by UP President Danilo L. Concepcion during the quick-response indignation rally held in the morning of January 19, in response to the letter issued by Department of National Defense (DND) Secretary Delfin N. Lorenzana unilaterally terminating the UP-DND Accord, action which many members of the UP community regard as a grave threat to the University’s academic freedom and security.

The quick-response rally was organized by the youth sector of the University of the Philippines System and Diliman under the broad-based alliance, UP Rise Against Tyranny and Dictatorship or UPRISE, with other sectors, including members of the lumad community from the Save Our Schools Network. The rally joins the clamor on social media by other members of the UP community protesting the abrupt move by the DND to unilaterally abrogate the Accord, without prior consultation with UP.

The UP-DND Accord, which was signed on June 30, 1989 by then UP President Jose Abueva and then Secretary of Defense Fidel V. Ramos, established certain norms and protocols governing relations between the University and military and police forces. These protocols include, among others, that prior notification shall be given by the Armed Forces of the Philippines or the Philippine National Police to the UP administration before conducting any military or police operations in any of the UP campuses of the eight UP constituent universities, and that, except in cases of hot pursuit or similar emergencies or ordinary transit through UP premises, no member of the AFP or PNP shall enter the premises of any of the UP campuses.

The UP-DND Accord was preceded by the Soto-Enrile Accord of 1981, which stemmed from a letter from then Defense Minister Juan Ponce Enrile to former League of Filipino Students national chair Sonia Soto. This was intended to protect schools and their students, faculty and staff from police and military incursions intended to suppress dissent and protest actions.

UP as a “safe space”

“Maraming hindi lubos na nakakaunawa sa kalahagahan ng Accord na ito [There are many who do not completely understand the significance of this Accord],” Concepcion stated, addressing the UP students, faculty, staff and officials who gathered during the rally. “Ang Accord na ito ang nagbibigay kalayaan sa ating mga estudyante at ating mga guro na maging malikhain at mapusok sa pag-iisip at paglikha, sapagkat alam nila na walang susupil sa kanilang mga gawain, na walang magmamanman sa kanilang bawat kilos at galaw, na walang pipigil sa kanilang pagpapahayag ng kanilang mga kaisipan at malayang pagtatagisan ng talino at kuro-kuro [This Accord grants our students and faculty the freedom to be creative and passionate in their thought and works, because they know that no one will suppress them, or monitor their every move, or stop them from the free expression of their views and intellectual debate],” he continued.

UP Diliman Chancellor Fidel Nemenzo, on his part, expressed his “grave concern” with the unilateral abrogation of the memorandum of agreement between UP and the DND and his objection to it on several grounds.

Nemenzo said that first, the Accord is constructive and has effectively promoted good will between the two institutions, as well as fostered a mutual respect for each other’s mandate and mechanisms for dialogue and resolutions. Second, the unilateral abrogation of the Accord denies UP its right to academic freedom, which as Concepcion also stressed, is founded on a constitutional right.

“If the DND says, as it does, that it would neither post military or police inside UP’s campuses, nor suppress academic freedom and freedom of expression, why abrogate the Accord?” Nemenzo pointed out.

Finally, the Accord itself states that nothing within it shall be construed as prohibition against the enforcement of the laws of the land.

“Scuttling the Accord strikes a dangerous blow to academic freedom, because it sends the message that intellectual and cultural inquiry, which is sacred in our University, has limits,” Nemenzo warned. He also cited the historical significance of the Accord. “The Accord was a democratic response to the suppression of UP and of freedoms during Martial Law. This year is the 50th anniversary of the Diliman Commune and next year is the 50th anniversary of the imposition of Martial Law. The Accord stands as a testament to the University’s actions on behalf of academic freedom. This is why we should and will defend UP as a safe space, a zone for free thought and free speech. Academic freedom and our University have to be protected and defended at all times.”

On the right side of history

Dr. Jay Batongbacal, Executive Associate Dean of the UP College of Law, assured the rally-goers that the UP College of Law is prepared to extend assistance to UP students and student organizations, faculty, staff and other UP sectors. “Rest assured that there are many of us ready to defend our freedom of thought and our freedom of speech. We will stand by you to defend the academic freedom of the University of the Philippines.”

UP Diliman Vice Chancellor for Student Affairs Louise Jashil R. Sonido, on her part, credited the courage, determination, unity and solidarity of the youth sector of UP. “To all those who continue to doubt and underestimate our youth, enough. Because the kids are all right. They are here and unafraid. They will stand their ground on the right side of history, and they will be remembered for their strength and vigilance, for their relentless service to the people despite red-tagging, despite political persecution, despite big bullies in government picking on them and pointing their guns at them. Our weapon is our criticism, our insolence, our daring, our defiance. History will remember that in the line of fire, UP stood its ground and it will not back down. We will defend the University.”

Across the entire UP System, UP constituent universities and members of the UP community have spoken out in protest against the unilateral termination of the UP-DND Accord.

As the UP Baguio University Council is finalizing its own statement, Chancellor Raymundo Rovillos issued a message to the UP Baguio community and the public on his Facebook page, calling the abrogation of the UP-DND agreement “very disturbing and alarming”. “Critical thinking and dissent are not synonymous to extremism/terrorism. Refusal to take these nuances into account in the current anti-insurgency drive is dangerous and counter-productive. The unbridled entry of the police and other military forces in the university would instill fear and curtail freedom, therefore threatening to destroy the very essence of a university,” Rovillos warned.

Pointing out that UP has offered assistance to police personnel and the National Bureau of Investigation with proper coordination with the UP administration, UP Los Baños (UPLB) Chancellor Jose V. Camacho, Jr. said in his statement that the Accord is not a hindrance to the enforcement of the country’s laws and judicial orders on campus. Therefore, the UPLB community views the unilateral termination of the UP-DND Accord as an assault against the freedom of UP as an institution, coming at the heels of “earlier threats to discontinue funding for the University, which was intended to silence and intimidate us”.

“We will not back down,” Camacho said. “We will continue with our duty to defend the freedom of our people guaranteed under the Constitution—the right to life and liberty, the freedom of speech, of expression and the right of the people to campaign against graft and corruption.”

UP Visayas Chancellor Clement Camposano issued a statement on the UP Visayas website denouncing the sudden termination, without consultation, of the UP-DND Agreement. “Historical events that have shaped the relationship of UP and the country’s security forces—many of these leaving wounds that have yet to heal—explain the University’s strong apprehension,” Camposano said. “While the DND has given assurances that constitutionally guaranteed rights and freedoms would not be suppressed, these historical events and the sordid reality of recent killings, abductions, and other forms of human rights abuses widely believed to have been perpetrated by security forces cannot but leave us unassured. We call on the members of the UP Visayas community to be steadfast and resolute in the defense of their democratic rights, and in ensuring that the University’s campuses remain free, safe, and welcoming towards a wide range of ideas and advocacies.”

UP Manila faculty and officials also issued a statement condemning the move by DND Sec. Lorenzana. “The unilateral decision of the DND is highly unacceptable and cannot be forcibly imposed on UP, the national university of the country. Claiming that the Accord has served as a ‘hindrance in providing effective security, safety, and welfare of the students, faculty, and employees of UP’ is certainly an empty assertion and cannot be used as justification over this arbitrary action. On the contrary, the termination of the Accord will make University constituents vulnerable to State attacks and various forms of human rights violations,” the statement read.

The UP Open University (UPOU) community asserted in its official statement that “we are one with the entire UP community in defending our academic freedom and our right for free and safe haven to openly express our ideas”. The statement continues: “This unilateral decision of the DND poses a grave threat, especially in this time where opinions and ideas are expressed in cyberspace. We call on the UPOU constituents and the entire UP community to be vigilant, unwavering, and steadfast in defending our freedom of speech, freedom to express dissent, and our academic freedom that is deeply ingrained in our history as a university.”

UP Cebu Chancellor Liza Corro and the UP Cebu administration, in their own statement, describe the recent experiences of UP Cebu students and faculty members with direct intimidation and threats, including red-tagging. “We strongly condemned such acts of transgression and bullying. We strongly condemn any and all forms of baseless accusations and red-tagging among our constituents. faculty and students alike. They deserve our respect, not harassment. The UP-DND Accord provides a safeguard for our constituents from such abuse of authority, and for promoting our rule of law. Thus, with the rest of the UP community, we in UP Cebu will staunchly defend our basic rights and will stand our ground.”

In the south, UP Mindanao declared in its statement that it “stands with the entire UP System in upholding the rights of the University, its students, faculty, and staff. While the UP-DND Accord cannot be unilaterally terminated, the letter of Sec. Lorenzana poses a threat intended to intimidate UP and its constituents. We, therefore, join the entire community in defending our rights, liberty, and safety.”

Finally, former UP President Jose V. Abueva who, together with then Defense Secretary Fidel Ramos, set down the agreement on the conduct of military and police operations inside UP premises on June 30, 1989, issued his own statement on the recent actions of the DND Secretary:

“[Then Defense Secretary] Fidel V. Ramos and I had great respect for each other and for the institutions we represented. We had a deep understanding between us about the inalienable rights to freedom, democracy, justice and peace that lasted beyond our respective presidencies. There was a deep, mutual understanding of the need to uphold this agreement and do everything for the good of UP and the rights of its students, faculty and staff. This understanding was rooted in mutual trust, and mutual respect.

I am appalled and dismayed about this unilateral abrogation,” Abueva lamented. 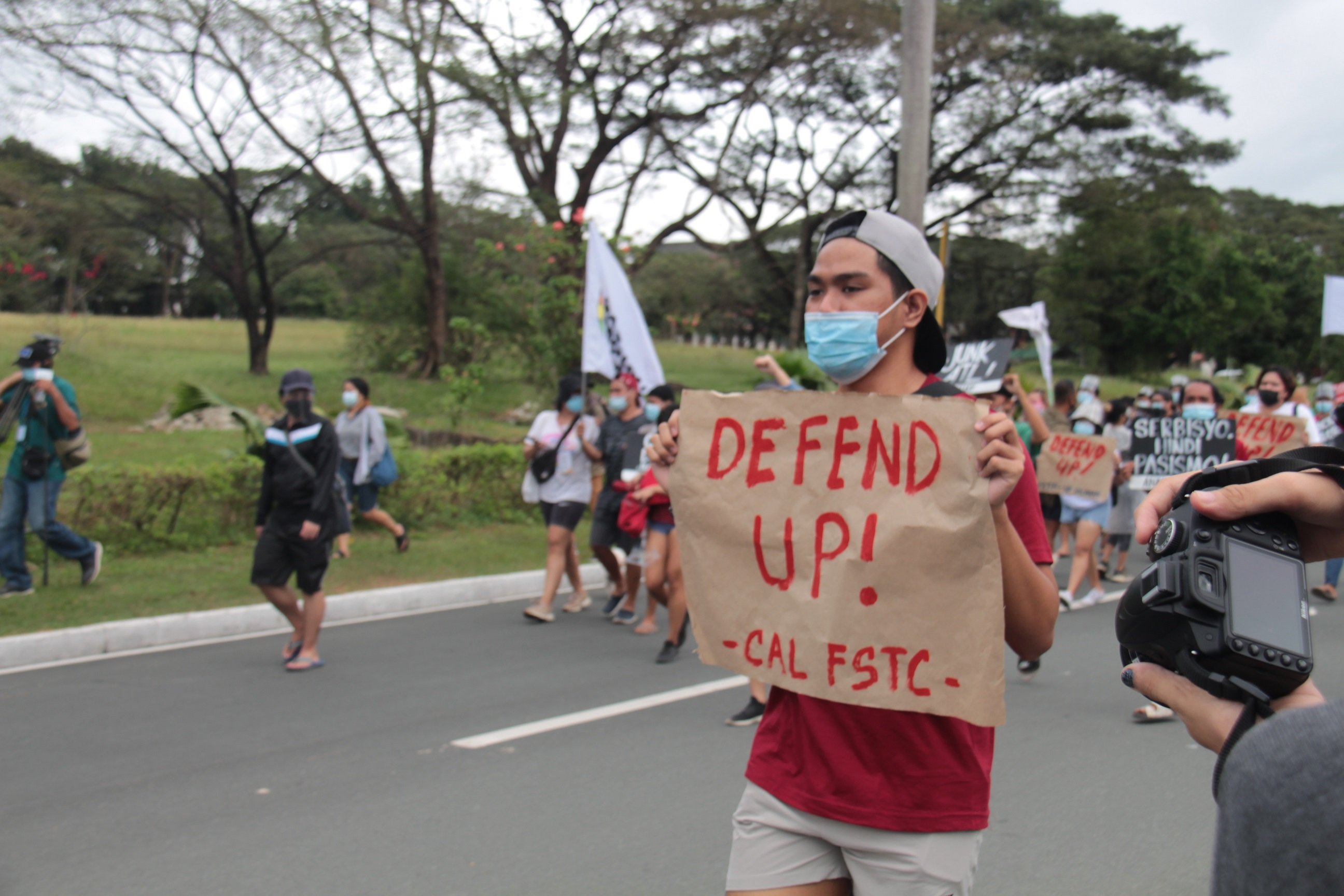 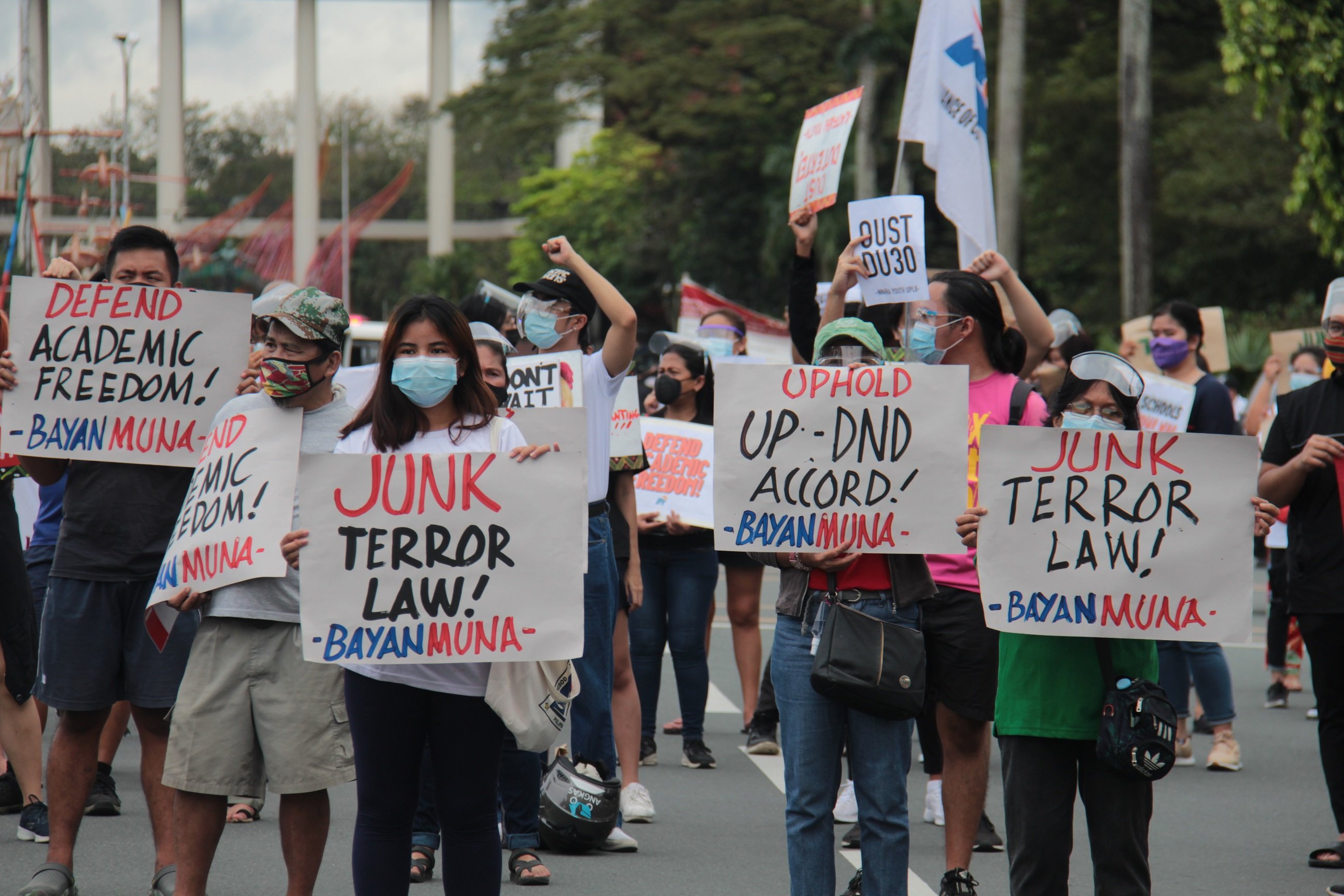 Video by UP Media and Public Relations Office