At its 1324th meeting on January 26, 2017, the Board of Regents of the University of the Philippines approved the UP Anti-Sexual Harassment Code, finally adopting into policy a proposal by gender advocates in the University which had been in the works for almost a decade.

The passage of the Code, which had been spearheaded by the UP Center for Women’s and Gender Studies, was necessary, despite the University having adopted an earlier anti-sexual harassment policy which served as the Implementing Rules and Regulations of the Anti-Sexual Harassment Law.

More responsive to the needs of the community

According to UP CWGS Director Odine de Guzman, efforts to amend the University’s 1998 Implementing Rules and Regulations to the 1995 Anti-Sexual Harassment Law or Republic Act 7877 can be traced back to 2002. This was after gender advocates realized the rapidly changing gender situation in the University and the need for a more responsive policy.

If Republic Act 7877 defined sexual harassment as a crime in work places and other venues for training or instruction, such as schools, the Civil Service Resolution prescribed the manner by which the law may be applied to government institutions, such as UP. In consideration of these developments, gender advocates in the University proposed that revisions to the 1998 IRR be made. And as early as 2005, a draft of the revised policy was presented.

On September 17, 2014, President Alfredo E. Pascual signed Memorandum PAEP No. 2014-54-A which endorsed the then Center for Women’s Studies’ sponsorship of “a UP System-wide conference to assess and identify effective strategies, which would promote and strengthen UP’s implementation of RA 7877.”

The Center, which was then under Director Judy M. Taguiwalo, was tasked by the President to “forward recommendations for further refining and improving our anti-sexual harassment initiatives and for strengthening our advocacy for women’s empowerment and gender equality.”

Gender advocates and experts from the University gathered in UP Baguio in March 2015 for a UP System-wide conference. Another conference followed also in UP Baguio in June 2015, where the draft of the proposed revisions was presented.

By August 2015, a draft proposal was submitted to the President. It was hoped that the proposed changes would also be presented to the BOR for consideration.

An initial review recommended several actions, including the reconciliation of the proposed amendments with a proposal from gender advocates of UP Diliman. Officials from the CWGS, the UPD Office of the Vice Chancellor for Student Affairs, the Diliman Legal Office, and the Office for Anti-Sexual Harassment would spend several months reconciling the proposals, as well as accommodating other measures which dealt with sexual harassment.

The resulting proposal not only defined what sexual harassment was in the context of the University, but also the various relationships where it might arise, as well as the various forms it might take. It also addressed gender concerns which were ambiguous in the IRR.  This final draft received the nod not only of gender advocates in the University, but also those of legal experts from the UP Office of the Vice President for Legal Affairs and the UP Law Center.

Better appreciation of identities and modes 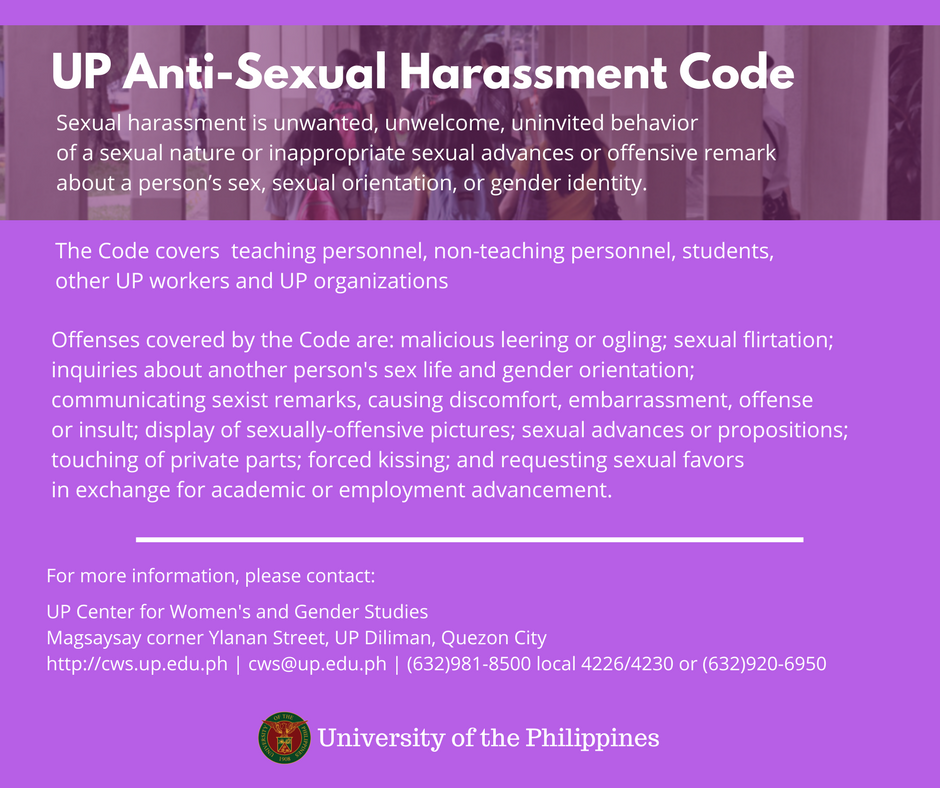 Director de Guzman takes great pride in the Anti-Sexual Harassment Code, as a University policy which may be the first of its kind in going beyond the traditional concept of gender and perpetration of sexual harassment.

As a Code, de Guzman says, the policy does not only draw inspiration from RA 7877, but also from other anti-sexual harassment policies of government agencies, advocacy groups, and even of advocates and gender groups themselves. “The dropping of the reference (solely) to the Law recognizes numerous sources for the Code,” she adds.

The new anti-sexual harassment policy of the University does not only define the offense and the various modes by which it can be committed, but also describes the different relationships where these offenses can be committed. The Code “expanded the definition of sexual harassment and it showed a better appreciation of the online and different modes,” de Guzman added.

Under the Code, sexual harassment is defined as “unwanted, unwelcome, uninvited behavior of a sexual nature or inappropriate sexual advances or offensive remark about a person’s sex, sexual orientation, or gender identity.”

Towards a more gender-sensitive community 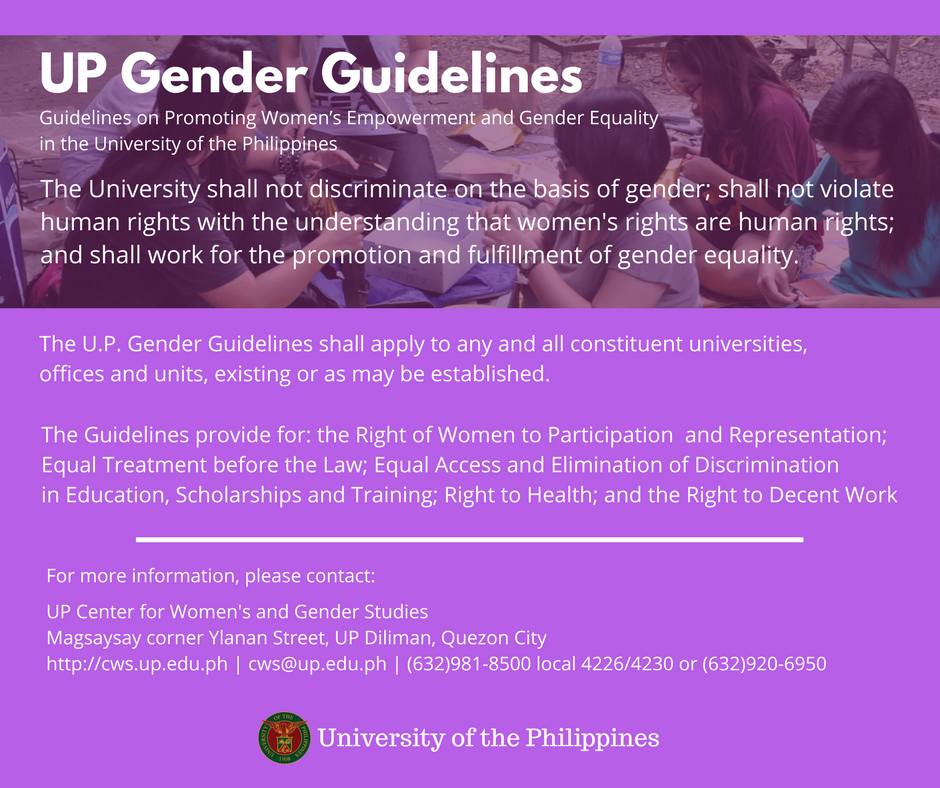 If the Code defines acts which can be considered sexually offensive, the UP Gender Guidelines, on the other hand, seek to provide an environment where faculty, staff and students can have access to different services and benefits regardless of their sex or sexual orientation.

Adopted by the BOR in its 1309th meeting on July 22, 2015, the Guidelines provide for the right of women to participation and representation; equal treatment before the law; equal access and the elimination of discrimination in education, scholarships and training; the right to health; and the right to decent work.

Conceived during the time of the CWGS director at that time, Sylvia Estrada-Claudio, the Guidelines were approved by the BOR during Director Taguiwalo’s tenure.

The Guidelines declare that “The University shall not discriminate on the basis of gender; shall not violate human rights with the understanding that women’s rights are human rights; and shall work for the promotion and fulfillment of gender equality.”

Inspired by the Magna Carta for Women or Republic Act 9710, de Guzman says the Guidelines allow UP to promote gender sensitivity, women’s empowerment, and the promotion of gender acceptability. “Through this we are able to initiate more programs on gender equality in the University,” she says.

De Guzman adds that the Guidelines enabled the promotion of affirmative action for women in the University, and created an environment where all persons in the community can fully develop their potentials regardless of their sexual orientation.

While the Code penalizes acts which offend persons of different genders, the Guidelines, she said, are a declaration of the beliefs by which the University stands. “It expresses our principles, our values and our world view,” she adds.

With the recent approval of the Code, and the promotion of the Guidelines, de Guzman hopes to see a University which is more sensitive to people of various genders, allowing them to fully realize their potentials in UP for the benefit of the people and of the country.