The UP CHDP is the UP Manila unit mandated by the University to enter into partnerships with Philippine municipalities to set up and maintain community-based health programs (CBHPs) that will benefit both parties. It provides the site for UP faculty, staff and students’ curricular (academic) immersion and service activities.

In 2007, the UP CHDP was revived by then UP Manila Chancellor Ramon L. Arcadio. The UP CHDP Conceptual Framework considers the community as a partner in health and development towards a healthier and more empowered community.

The objectives of the UP CHDP are to assist communities in attaining enhanced capacities in their own health care and development through the Primary Health Care Approach while providing learning opportunities for the faculty and students of UP in the principles and practice of community health and development which they can also use in their extension and volunteer work. 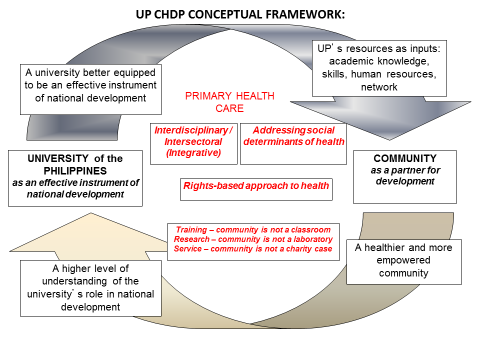 The community partner of the UP CHDP from 2007-2013 was the Municipality of San Juan, Batangas (San Juan started working with UP Manila through the UP College of Medicine in 2006) while the partner from 2013 to the present is the Province of Cavite through the A.M.I.G.A. Inter-L.G.U. Health Collaboration Council.

The municipality of San Juan and the UP CHDP successfully worked together from 2006 to 2013 “to decrease by 50 percent the morbidity of children 0-12 years old.” In addition to the municipal-wide program on children’s health, there was also a municipal-wide program on dengue prevention. The dengue program involved the formation of a Barangay Dengue Task Force in all the barangays. These groups created the mechanism whereby community members were able to participate actively in the program. School-Based Dengue Task Force groups were also formed in every public and private school in the municipality. Several public elementary schools were able to form teams of “Bulilit Health Scouts” which assisted in the implementation of school-based projects, including the school-based dengue prevention efforts.

There were also several barangay-wide initiatives such as solid-waste management programs and livelihood programs, as well as school-based programs anchored on the “Fit for School” initiative of the Department of Education.

A school-based program showcasing the collaboration among the Municipal LGU, MHO, Department of Education, School Officials and Teachers and a University. Photo courtesy of Dr. Anthony G.H. Cordero.

There were also regular primary care clinical services in barangay health stations. The Rural Health Unit staff and the UP students worked together to provide primary care services with the assistance of the local government unit (LGU) and the health workers in the barangay.

A disengagement and appreciation ceremony was held in March 2013 where both the municipality of San Juan and UP showed their gratitude for the collaboration. As early as 2012, the UP CHDP started discussions with the province of Cavite on a potential partnership program. Through the support and guidance of the Cavite Provincial Governor, the Hon. Juanito Victor Remulla Jr. and the Cavite Provincial Health Officer, Dr George Repique, the UP CHDP was introduced to the Amiga Inter-LGU Health Collaboration Council. The Council is made up of the municipalities of Alfonso, Mendez, Indang, General Emilio Aguinaldo and Amadeo.

Orientation activities were held from March to April 2013. Situational analysis was done by both parties through several participatory activities from May to July 2013: AMIGA decided to prioritize the issue of non-communicable diseases (NCDs) especially hypertension and diabetes in terms of the partnership with the UP CHDP. The objective that was collectively decided by both parties was “To increase by 25 percent the number of controlled hypertensives and diabetics within Amiga in five years (2013 to 2018).”

The problem was further analyzed from July to October 2013 using the “problem tree analysis” approach. The strategies and interventions that are collectively being formulated, implemented and monitored by Amiga and UP are partly based on the factors that were determined through the problem tree analysis. Amiga and UP also decided in April 2014 to anchor all the activities on hypertension and diabetes on the Department of Health’s PhilPEN (Philippine Package of Essential Services for Non-Communicable Diseases) Strategy.

Most of the collective efforts by Amiga and UP have since then been geared towards achieving the main objective. These efforts included the following: (1) engagement of organized groups and interested individuals so they can be partners in the program; (2) regular community readiness assessment; (3) preparatory activities for the screening of all adults 25 years old and above in the barangays; (4) risk assessment using the DOH PhilPEN Risk Assessment Form and data management; (5) development, implementation and monitoring of barangay action plans based on the risk assessment data and on the factors that came out during the problem analysis in 2013.

There were also several initiatives specific to particular municipalities and barangays. These were developed, implemented and evaluated by the concerned municipality or barangay with one or several UP units. Some of these initiatives included the following: (1) Universal PhilHealth Coverage project initiated by the municipality of General Aguinaldo; (2) School-based Handwashing and Toothbrushing program by the municipality of Mendez and the Department of Education; (3) Oral Health Workers Training with several towns; (4) Inter-Professional Practice in the five towns; and (5) numerous other barangay-specific projects within the municipalities of Indang, Amadeo, Alfonso and Mendez.

There were also activities that were mainly patient-based curative services. These were the out-patient clinics in the rural health units and barangay health stations were the LGUs. The municipal health offices and the rural health units worked together with the UP CHDP in providing primary care services. There were also regular oral health clinics and dental missions. From 2013 to 2015, regular dermatology clinics were conducted by the UP-PGH Dermatology Section.

As of June 2016, the Colleges of Dentistry, Medicine, Nursing, Pharmacy, Public Health and Social Work and Community Development ( in UP Diliman) have worked with the program. Two departments and one section from UP-PGH (Dermatology, Family and Community Medicine and Pediatrics) have also sent their consultants and residents to the program. Cavite and UP have provided full-time community organizers to help in the organizing, advocacy, management and mobilization work within the program.

The official staff house of the program is in Barangay Bancod, Indang, Cavite. The staff house is maintained through the generous support of the Cavite State University (Indang campus) and the provincial government of Cavite.

UP Manila Chancellor Dr. Carmencita D. Padilla continues the tradition of providing invaluable guidance, support and assistance to the UP CHDP.

The UP CHDP has advocated the following guiding principles in the partnership program with San Juan and Cavite: (1) Primary Health Care Approach which recognizes health as a right and the importance of people’s participation, (2) Social Determinants Approach, (3) Community Development Theories and Community Organizing Principles and (4) Inter-Professional Education/Practice in which the UP CHDP is in a unique position of having the mechanism to achieve these purposes because of its multidisciplinary nature.

Dr. Cordero is a graduate of the UP College of Medicine. He is the director of the UP Manila Community Health & Development Program and chair of the UP College of Medicine Return Service Obligation Program. He serves as faculty adviser for community partnership programs with several student organizations in UP Manila. He was the 2013 UP Manila Gawad Chancellor Awardee for Outstanding Faculty in Extension Service and the 2015 Gawad Chancellor Awardee for Outstanding Faculty in Teaching. He is engaged in numerous extension and volunteer service work in the field of community health and development and gender and development. He is an active volunteer of the UP Manila Pahinungod, a 2015 DOH Bayani ng Kalusugan Awardee. Email him at ahcordero@up.edu.ph.