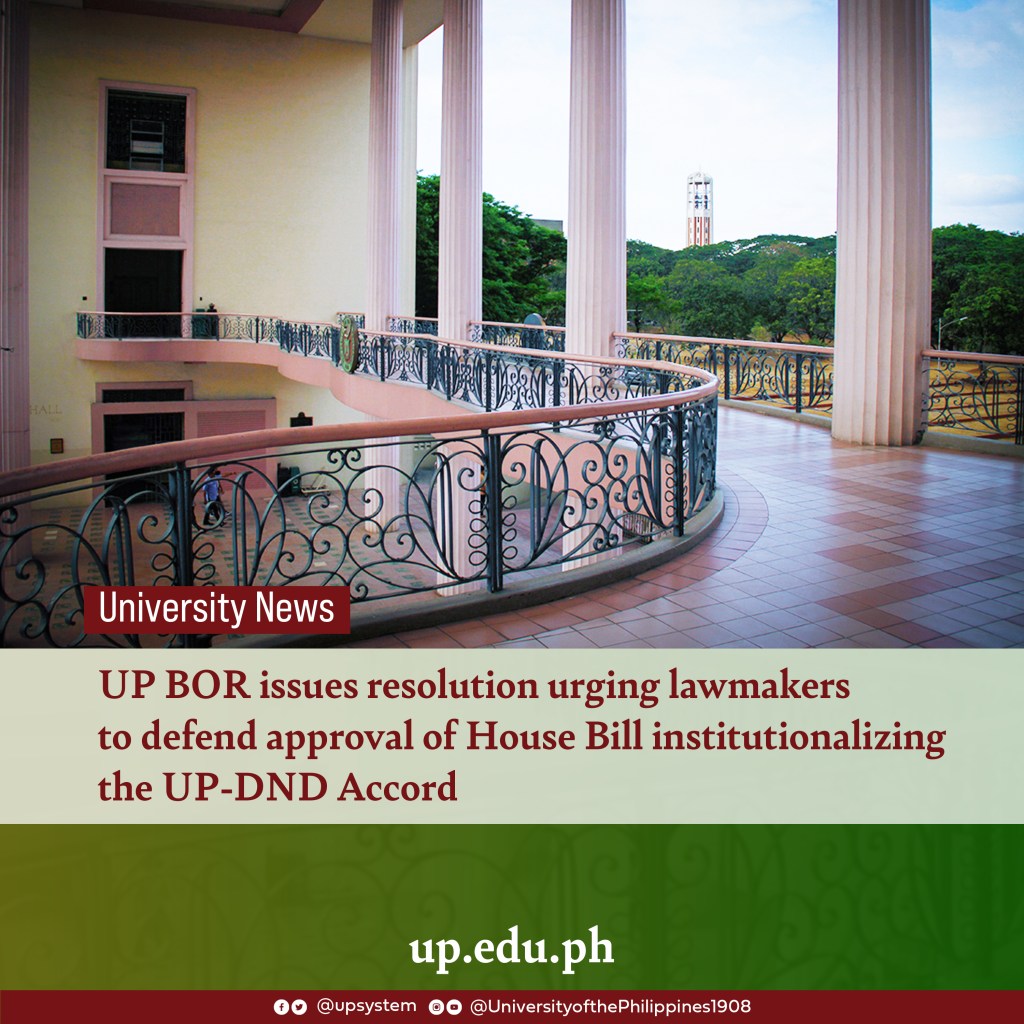 The University of the Philippines (UP) Board of Regents is urging members of the House of Representatives to declare as null and void the reconsideration of the approval on third reading of House Bill No. 10171, which would institutionalize the 1989 UP-Department of National Defense (UP-DND) Accord by amending Republic Act No. 9500 or the 2008 UP Charter.

In its 1365th meeting held on November 4, 2021, the UP BOR, the highest governing body of the UP System, approved and adopted a Resolution commending the authors of the bill and the members of the House of Representatives “who heeded the calls of the UP community to defend academic freedom and who worked and fought for the approval of HB No. 10171”.

The Resolution named Reps. Sarah Jane Elago, Isagani Zarate, France Castro, Ferdinand Gaite, Arlene Brosas, Eufemia Cullamat, and Jose Christopher Belmote, who moved to declare as null and void the reconsideration of the approval on the third reading of HB No. 10171, citing the reconsideration as a “violation of Section 106 of the Rules of the 18th Congress”.

The UP BOR Resolution urgently calls on the Senate to undertake parallel efforts to approve the Senate version of the bill filed by Senator Joel Villanueva, which as of current time remains pending at the committee level. The Resolution also requests the DND and the DILG to continue to observe and enforce the principles, objectives and guidelines of the 1989 UP-DND Accord and the 1992 UP-DILG Accord “as an act of good faith in the light of the recent development in Congress seeking to enact them into law”.

Read the UP BOR Resolution here.

The UP-DND Accord was signed on June 30, 1989, between the University and the DND to recognize the Constitutional guarantee of academic freedom. The Accord prohibits any element of the Armed Forces of the Philippines (AFP), the Philippine National Police (PNP) and other law enforcement agencies to enter or conduct any operations in any of the UP campuses without prior notification to, invitation from, and coordination with the University, except in hot pursuit or similar emergencies. In 1990, following the enactment of Republic Act. No. 6975 establishing the PNP, UP and the Department of Interior and Local Government also entered into a similar agreement, known as the 1992 UP-DILG Accord.

The two agreements, both signed in good faith by all institutions involved, were meant to protect the University’s constituents from possible abuses by the military and police.

In a letter to UP President Danilo L. Concepcion dated January 15, 2021, DND Secretary Delfin Lorenzana unilaterally abrogated the 1989 UP-DND without prior notice to or consultations with UP. The move sparked waves of protest from members of the UP community, many of whom perceived it as a threat to academic freedom and freedom of expression within the University.

House Bill No. 10171 was unanimously approved by the House of Representatives on its third reading on September 21, 2021, with 179 affirmative votes and no negative votes and abstention. The bill would amend Section 11 of the UP Charter to include Sub-Sections A-H. Sub-Section 11-A would require the PNP, AFP or any other law enforcement agency to give prior notification to University officials before conducting any activity within the campus. Sub-Section 11-B, on the other hand, would bar the entry of the PNP, AFP and other law enforcement agency personnel in all campuses except in cases of hot pursuit and similar emergencies. Other sub-sections would prohibit any interference by law enforcement agencies of peaceful protest actions within UP premises. Information about any UP student, faculty, or staff arrested anywhere in the country should promptly reach UP authorities.

However, the House approved the motion to reconsider its third reading approval of the bill on September 30, 2021. Several representatives countered by moving to declare the reconsideration null and void. The University expressed its full support of this move, citing the unanimous approval on the third reading as the express recognition of the Filipino people that the provisions of the Accords are essential for UP to enjoy academic freedom as guaranteed by the Constitution and as the lifeblood of UP’s existence.