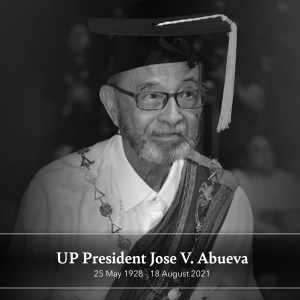 The story of the man that Dr. Jose Veloso Abueva would become—political scientist and public administration scholar, founder, and President of Kalayaan College, and Professor Emeritus and 16th President of the University of the Philippines—began with the story of a boy who survived an untold tragedy and went on to live his life advocating for peace.

The story is recounted in One by One (2004) by Daisaku Ikeda, Japanese Buddhist philosopher, educator, peace advocate, and honorary President of Soka Gakkai and founding President of the Soka Gakkai International. The book is a collection of essays. Ikeda reflects on his encounters with various world figures, scholars, and activists who have inspired him. The article, “Refusing to Hate”, tells of Dr. Abueva, then a teenaged boy during the last year of the Japanese occupation of the country in World War II. Their parents, Teodoro and Nena, known resistance fighters, were tortured and taken away from their children. While his brother Napoleon “Billy” stayed to look after their five other siblings, Jose, together with a cousin, set out in a boat to search for his parents. Eventually, he came upon the torn and bloodied remnants of their clothing near a hill, where Filipino resistance fighters had been reportedly executed. There, he gathered their remains and made the sad journey back to his orphaned siblings.

Others may have been consumed with anger and hate over the tragedy that had befallen their family. On the other hand, Dr. Abueva and his siblings rose above it, striving to support one another. In time, each Abueva sibling attained success and made their marks locally and internationally. For instance, his brother Napoleon became National Artist for Sculpture. Dr. Abueva excelled in the areas of education, development, and peace studies.

Rising from the ranks

Service to the UNU

“At the UNU, Dr. Abueva worked with a team of talented, dedicated, and multicultural scholars to advance UNU’s mission of coordinating research on such global issues as eliminating hunger, managing natural resources, and promoting social development. Throughout their stay in Japan, Dr. Abueva and his family made a conscious effort to make friends and be ambassadors of goodwill, learning the Japanese language and culture. ‘By living, learning and working in Japan, by fate or accident, we’d like to feel that we helped to achieve on a limited scale a reconciliation between Filipinos and Japanese,’ [Abueva writes].” 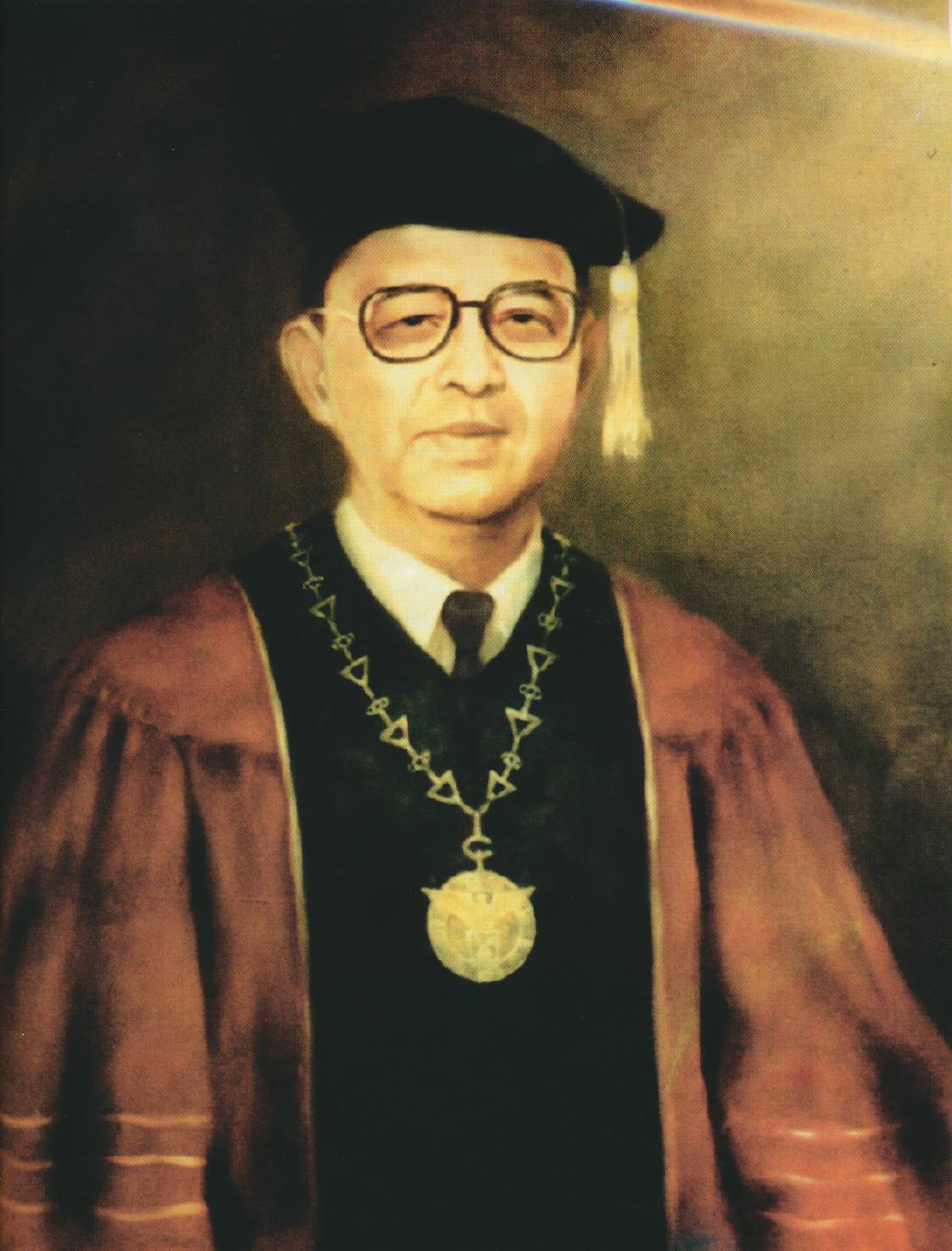 Equitable development, nationalism, and peace became the hallmarks of Abueva’s administration when he became President of the University of the Philippines from 1987 to 1993, serving concurrently as Chancellor of UP Diliman from 1990 to 1991. Following the observation that enrollment in UP was declining among students from marginalized communities, he introduced the Socialized Tuition Fee Assistance Program (STFAP) in 1987. The program bracketed UP students and ensured that wealthy students paid higher tuition to subsidize more underprivileged scholars. He also institutionalized a Filipino language policy within the University, for which he was recognized in 1994-1995 with the Gawad Sikolohiyang Pilipino from the Pambansang Samahan sa Sikolohiyang Pilipino, the Gawad Cecilio K. Lopez from the UP Sentro ng Wikang Filipino, and recognition from the UP Departmento ng Filipino at Panitikan ng Pilipinas. These two are among the cornerstones of his legacy as UP President.

As a dedicated educator, Abueva served the University as Professor of Political Science and Public Administration from 1993 to 1998 and Professor Emeritus of Public Administration and Political Science from 1998 onwards. In 2000, he and several other UP faculty members established the Kalayaan College, becoming its first President. Kalayaan College, a private, four-year college now located in Quezon City and accredited by the Philippine Commission on Higher Education, follows UP’s curriculum. UP faculty comprises most of its founders and professors. As a reflection of Abueva’s own commitment to national development and peace, Kalayaan College’s core values are anchored on the 1987 Constitution: helping build “a just and humane society…”; helping build “democracy under the rule of law and a regime of truth, justice, freedom, love, equality, and peace…”; learning for truth, professional competence, and leadership for the common good; and contributing to global peace and human development.

As a political science and public administration scholar, Abueva remained in active service to the academe and the government, becoming a member of the Presidential Task Force on Education in 2007 under the Office of the Philippine President Gloria Macapagal Arroyo. He advocated for federalism and parliamentary government in the country. He also served as Chair of the Committee on Constitutional Continuity and Change of the Philippine Political Science Association, as Trustee and Incorporator of the Center for Media Freedom and Responsibility, as Chair of the Board of Advisers of the Citizen’s Movement for a Federal Philippines (CMFP), and as a member of the Philippine Constitution Association (PHILCONSA).

He received numerous awards and citations, including The Outstanding Young Men (TOYM) Award in Political Science from the Philippine Junior Chamber of Commerce in 1962, the Most Outstanding Alumnus in the Social Sciences by the UP Alumni Association in 1976, the Award of Recognition by the US Big Ten Universities Alumni Associations, an honorary doctorate from the Soka University in Tokyo in 1991, and the Leadership Award from the UP National College of Public Administration and Governance during its 50th anniversary in 2002.

House of Peace at the heart of UP

For all his lifetime’s worth of stellar accomplishments as an academician, university administrator, and political scientist, one of Abueva’s most lasting legacies is the contributions he made for the cause of peace and global understanding. In May 1993, the UP Balay Internasyonal was inaugurated in UP Diliman—one of Abueva’s more significant projects. Among its facilities is the Balay Kalinaw (a Cebuano word meaning “peace”), also known as Ikeda Hall, designed by former UP Architecture Dean Mary Ann Arañas-Espina, in honor of Daisaku Ikeda.

Ikeda recounts the official opening of Balay Kalinaw in his essay, to which Abueva naturally invited him: “He [Abueva] also named the building the Ikeda Hall, saying he hoped it would be a symbol of friendship between the Philippines and Japan. In my remarks on that occasion… I declared my determination to devote my life, as an individual Japanese citizen, to the people of Asia… Dr. Abueva’s parents were among those who fell in the night without seeing the dawn of peace. I shared my belief that the same cry must have issued from his parents’ lives as they entrusted him with his mission.”

Abueva was moved by this—Ikeda recalls seeing him dabbing tears from his eyes. Then Abueva himself rose from his seat and quoted from a poem of his own:

“We want an end to killing and maiming
caused by greed or creed, class or tribe
because the poor are weak and the strong are unjust.”

“His voice rang through the House of Peace,” Ikeda wrote, “and it seemed to reach all the way to that hill he climbed so many years ago.”