On 16 March 2021, UP Visayas Tacloban College launched the Kaagi, Kabilin, Kultura (History, Heritage, Culture) Conversation Series through its community internet radio Bátì UP Tacloban with “Reflections on Eastern Visayas in the Quincentennial Commemorations,” a conversation between Dr. Rolando Borrinaga, a prominent historian of Eastern Visayas, and UP Tacloban faculty member Mars Edwenson Briones. The series is part of UP Tacloban’s participation in the Quincentennial Commemorations of the Philippine leg in the first circumnavigation of the world, the victory at Mactan, and the birth of Christianity in the Philippines.

Dr. Borrinaga ruminated on the first encounter between Filipino natives and Spaniards in Homonhon Island in Guiuan, Eastern Samar, and the events following this encounter. The conversation was streamed exactly 500 years after Ferdinand Magellan’s first sighting of Samar island. The following day, on 17 March 1521, Magellan’s expedition disembarked at Homonhon, setting foot on Philippine soil for the first time.

Dr. Borrinaga has contributed to the Quincentennial Commemorations through his research and “revisionist papers” on the encounter in Homonhon, which he said has been obfuscated by errors and a hoax. Dr. Borrinaga’s studies show that that the first Easter Sunday mass in the Philippines happened in western and not in southeastern Limasawa. The Mojares panel has upheld this finding and endorsed his recommendation to adopt western Limasawa as the site of the first Easter Sunday mass in the country.

Dr. Borrinaga also explained the theme of the Quincentennial Commemorations, which is “Victory and Humanity.” The word “victory” refers to Lapulapu’s triumph in the Battle of Mactan while the word “humanity” refers to the Filipino natives’ compassion and magnanimity towards the ailing and famished crew of Magellan in Homonhon. Dr. Borrinaga fleshed out Spanish historian Antonio Pigafetta’s account of this encounter with the explanation that the natives generously offered coconuts and honey, which were abundant in the island, to Magellan and his crew to restore their health. The conversation with Dr. Borrinaga also explored early Spanish cartography of Eastern Visayas, toponyms, and some of their phonetic and spelling changes through time. 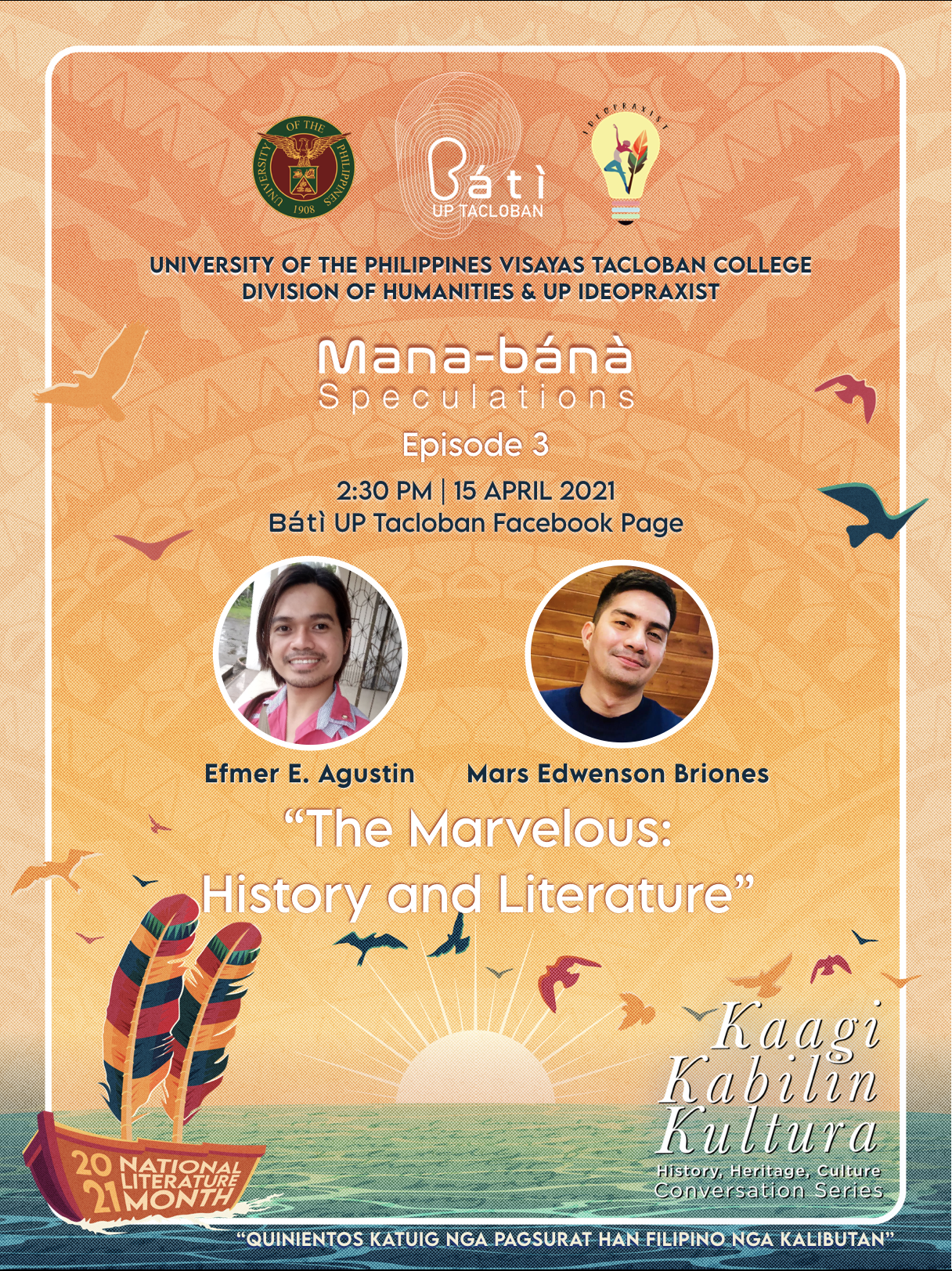 The second episode of the Kaagi, Kabilin, Kultura Conversation Series airs on 15 April 2021 with UP Tacloban faculty member Asst. Professor Efmer E. Agustin as the featured scholar. The title of the episode is “The Marvelous: History and Literature.” It is one the activities in UP Tacloban’s 2021 National Literature Month celebration, which is led by the Division of Humanities and which bears the theme “Quinientos Katuig nga Pagsurat han Filipino nga Kalibutan” (500 Years of Writing the Filipino World). Drawing on the writings of the 17th century Jesuit missionary and historian Father Francisco Ignacio Alcina, the conversation with Prof. Agustin will explore the literary aspects of writing history, which could encourage a more critical and contemplative approach to history and historiography.

The first and second episodes of the Kaagi, Kabilin, Kultura Conversation Series are in the form of mana-bánà or speculations about themes or ideas in and about Philippine history, heritage, and culture. In June 2021, Bátì UP Tacloban will add another episode to the series this time in the form of a roundtable discussion among local scholars, religious leaders, and cultural workers about the Santo Niño de Tacloban, whose feast is annually celebrated on June 30. The episode will also serve as the launching of the online exhibition “Santo Niño, Bendísyuni: Images and Narratives of the Holy Child in Eastern Visayas.” Featuring photos and oral narratives about Santo Niño sculptures from different parts of the region, the exhibition is also part of UP Tacloban’s contribution to the Quincentennial Commemorations in the Philippines.