In this COVID-19 crisis, hospital workers are critical to humanity’s health and survival. When a disaster strikes on top of an already overwhelming public health crisis, the pressure of a zero-casualty goal weighs even heavier on doctors, nurses, aides, utility workers, security personnel, and responders.

The May 16 fire at the UP Philippine General Hospital (UP PGH), the largest COVID-19 referral facility, tested the mettle of its employees and proved they were ready and willing to go beyond the call of duty. It was their genuine desire to save lives that spurred them to think fast and remain calm. These effectively diffused panic and encouraged cooperation from patients and watchers to evacuate in an orderly manner.

The heart of heroism and the spirit of service exemplified by its employees, and UP PGH’s Disaster Risk Reduction and Management Plan (DRRMP), with pandemic protocols in place, ensured that no one died from the blaze that broke out past midnight.

Stepping up and stepping in

Dr. Rodney Dofitas, who heads manpower support in the UP PGH COVID-19 Crisis Team, happened to be in the hospital when the fire started in the Operating Room Sterilization Area (ORSA) on the third floor of the Central Block.

No, he was not on duty at the time. He had been with his aunt who sadly passed away a few hours before the fire. He was in the elevator when, upon the door opening at the third floor, he heard loud voices. When he went out to investigate, he saw smoke spilling out onto the hallway outside ORSA. The Crisis Team had to be informed, but his phone was barely hanging on to battery life.

A quick charge and messages sent to the Team, Dofitas knew he had to take charge until UP PGH Director Gerardo Legaspi arrived. He also knew where to find someone crucial to managing the emergency because Dofitas had seen him hours before.

Safety Officer Joel Santiago was in his hospital bed when Dofitas returned to his room. Only, it was not like his visit earlier that evening. Dressed in his hospital gown, Santiago did not hesitate to get up, put on pants and boots, and go into action.

Dofitas and Santiago worked with the firefighters on the scene. 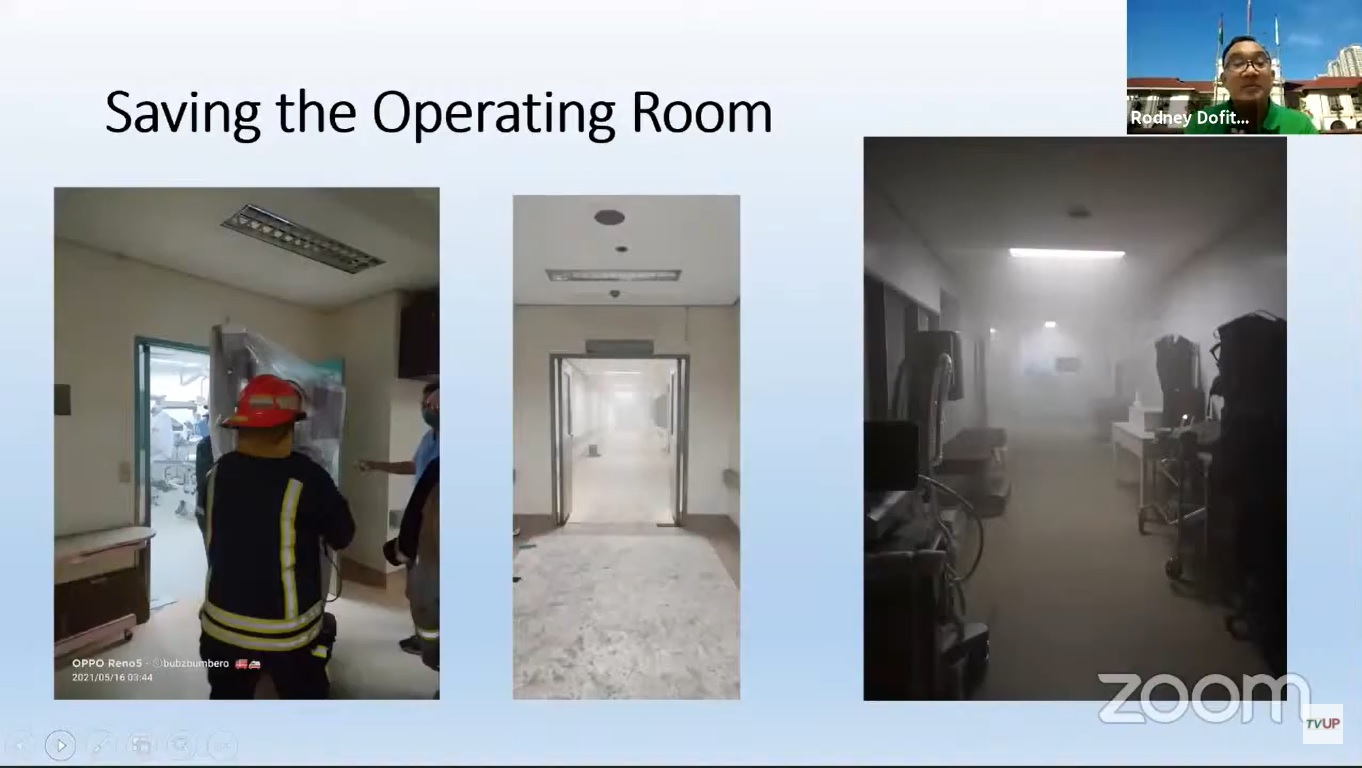 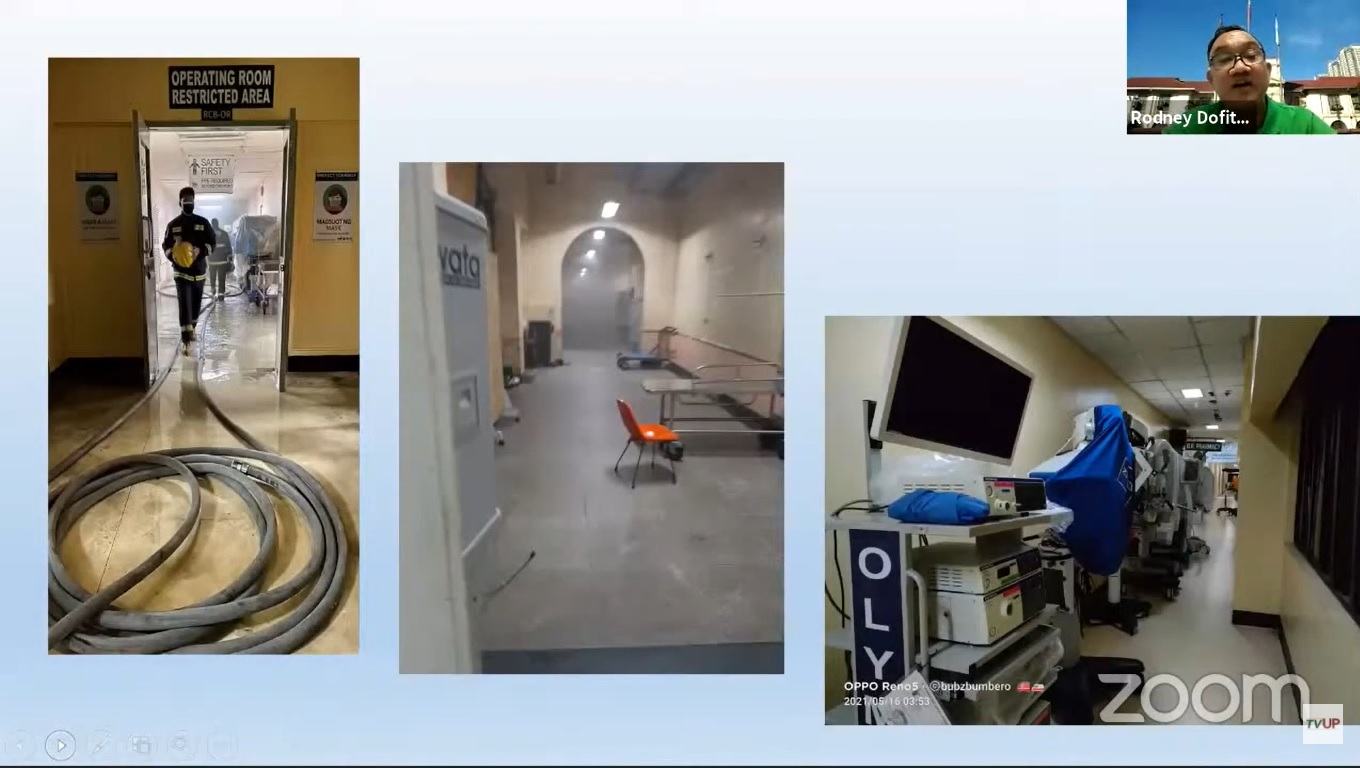 In another part of the hospital, at the Neonatal Intensive Care Unit (NICU), nurse Kathrina Bianca Macababbad was bathing the babies in her care when she was alerted to the fire on the floor below. Wasting no time, she fought back her fear and with fellow nurses, started the priority evacuation of the 35 babies in NICU.

The healthier ones, those who were breathing on their own and could be transported in emergency vests, were brought down first. Refusing to leave any baby behind, she and nurse Jomar Mallari rushed back and forth from the ground to the fourth floors to rescue babies on mechanical ventilators, then babies who were intubated.

All babies were saved.

Dofitas, Santiago, Macababbad, and Mallari, along with UP PGH residents, Dr. Earle Ceo Abrenica and Dr. Alexandra Lee; Safety Officer Ramil Ranoa; NICU nurses Esmeralda Ninto and Phoebe Rose Malabanan; and, nurse and volunteer firefighter Quintin Bagay Jr., were conferred the Order of Lapu-Lapu by President Rodrigo Duterte on June 2 for their heroism. The Order of Lapu-Lapu is conferred upon those who accomplished extraordinary acts of service and exceptional contributions to the country.

While they received the recognition, the UP Manila (UPM) and UP PGH leadership emphasized that it was everyone at the hospital that helped avert what could have been a more disastrous fire had it claimed lives.

UPM Chancellor Carmencita Padilla said that in her 43-year stay at UPM and UP PGH, there have been three fire incidents, including the one that happened on May 16. All three took place at night, evacuation had to be undertaken, and all were zero-casualty incidents. Every evacuation carried out by responders and personnel, she said, “is an offering of their lives,” and she expressed gratitude to and lauded the brave and selfless actions of UP PGH staff and the firefighters.

“The best asset of UP-PGH is its people,” Legaspi emphasized. The hospital director declared he was “indebted to [all] the personnel” because it was their collective action, their bayanihan, that saved everyone. Bayanihan was also at work after the fire. UP PGH received a deluge of support, from other hospitals taking in PGH patients to providing industrial fans and equipment that helped dissipate smoke inside the building, from donating respirators and masks to food and drink, and even money.

People first, property second. These were Legaspi’s priority concerns when he arrived at the hospital less than an hour after he received news of the fire. He scoured all levels of the Central Block to check that everyone had been evacuated before working with responders and hospital personnel to move equipment out of danger. He estimated the damage at around P50 million.

Dofitas added that it was the cooperation between UP PGH personnel, responders, patients, and watchers, all following the hospital’s preparedness plan, which ensured that no one perished in the fire and that damage was limited to property.

“We knew what to do because we had regular drills,” Santiago said. This, on top of an updated disaster risk management plan that incorporated the health safety protocols of the pandemic. Appropriate evacuation areas had been identified. COVID-19 patients were separated from non-COVID-19 cases.

Bagay concurred with Santiago. “It was just a matter of following the protocols in place.”

Dr. Regina Berba, head of the UP PGH Hospital Infection Control Unit, revealed that no resulting infections from the evacuation have yet been reported.

Willingness to act and help in times of disaster can only do so much without guidance on what needs to be done in an efficient manner. In fact, individual actions without adherence to plans in place, the “doing what I think is right” mindset, adds chaos to an already volatile situation, according to Dr. Carlos Primero Gundran, head of UPM DRRM.

This is where the Incident Command System (ICS) comes in. It plays a key role in managing emergency events and disasters. It is the unified system that makes sure the DRRMP is implemented effectively. “The ICS is used for command, control and coordination in managing an incident, and whose main purposes are for the safety of the responders and other personnel involved in the incident, achievement of tactical objectives, and efficient and optimal use of resources,” explained Genaro Cuaresma, UP Resilience Institute Director for Institution Building.

He praised UP PGH’s DRRMP and ICS that “resulted in the presence of mind, timely response, and appropriate courses of action done by all personnel during the time of the incident, which averted a major disaster in the country’s leading government hospital.” It would not have been possible if they had not been capable and properly trained to handle such an event.

“The immediate and orderly evacuation of the patients in the affected areas gave the Emergency Response Team time to evacuate and salvage expensive medical equipment in the ORSA and adjacent areas,” Cuaresma added.

“UP PGH’s preparedness is worth emulating. . . . Like UP PGH, [other] institutions should conduct regular emergency drills which should be taken seriously. . . . Disaster preparedness is a continuing cycle of: (1) hazards and risks assessment; (2) building a plan; (3) capacity building; (4) testing and evaluating; and, (5) improving the plan. As such, an institution’s DRRMP, ICS, response protocols, and ERT readiness, among others, should be tested regularly.”

As UP PGH responds to the COVID-19 pandemic, it is also fully capable of handling an emergency because it has the necessary tools, systems, and strategies in place. In any emergency or disaster, hospitals and health care facilities are one of the most important structures for survival; so there is no such thing as “overpreparedness” as Padilla called it. 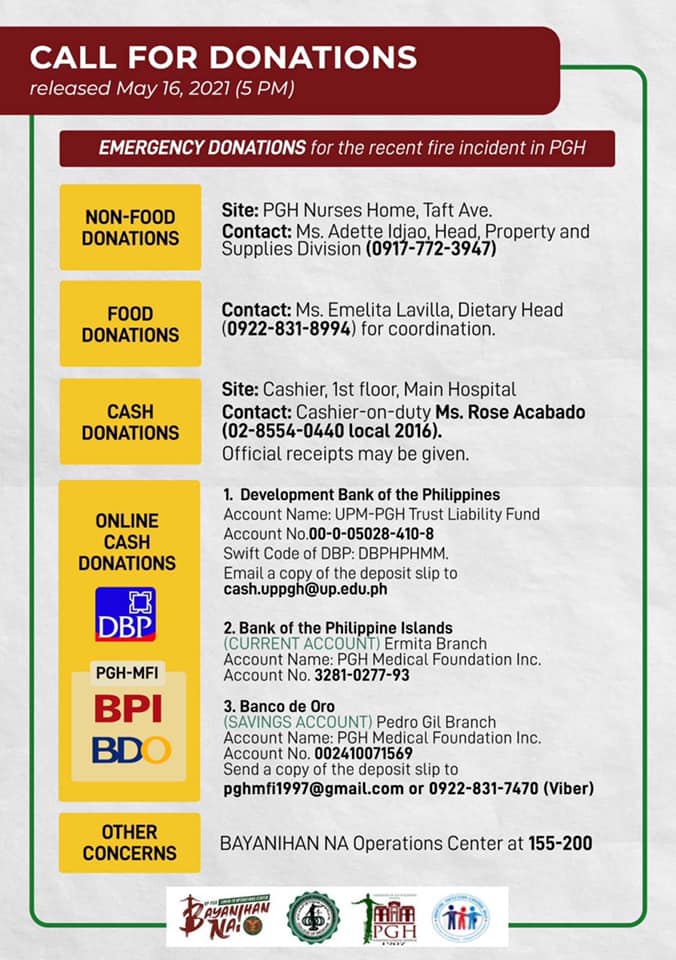 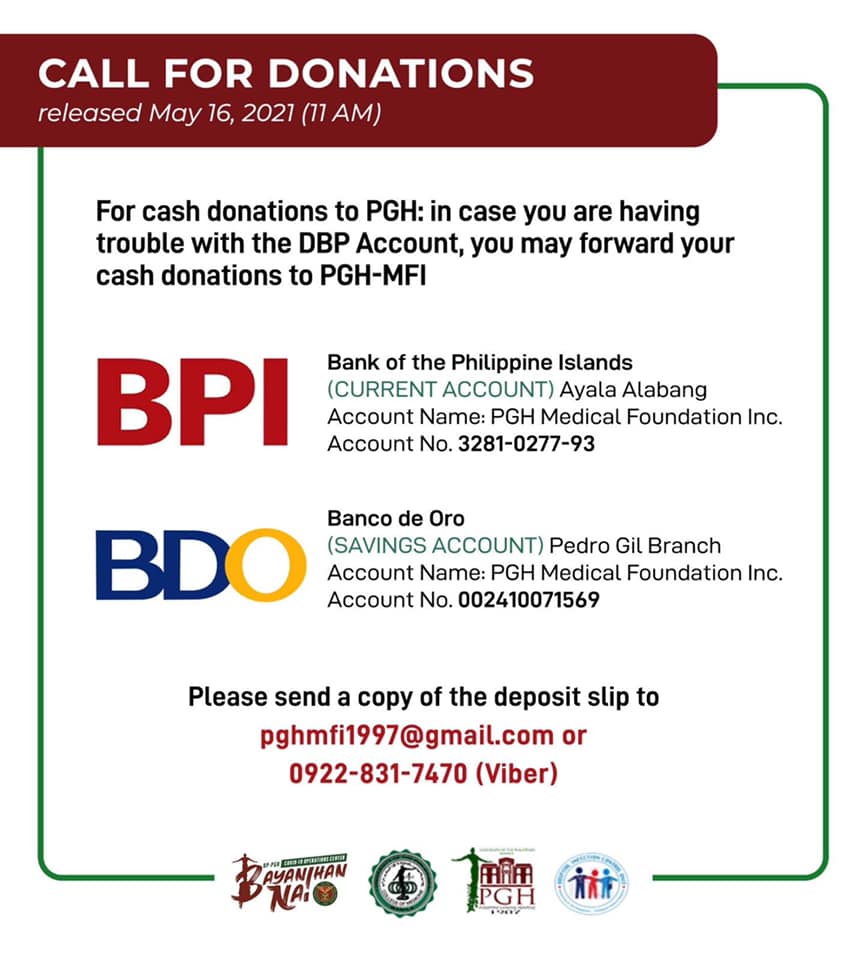 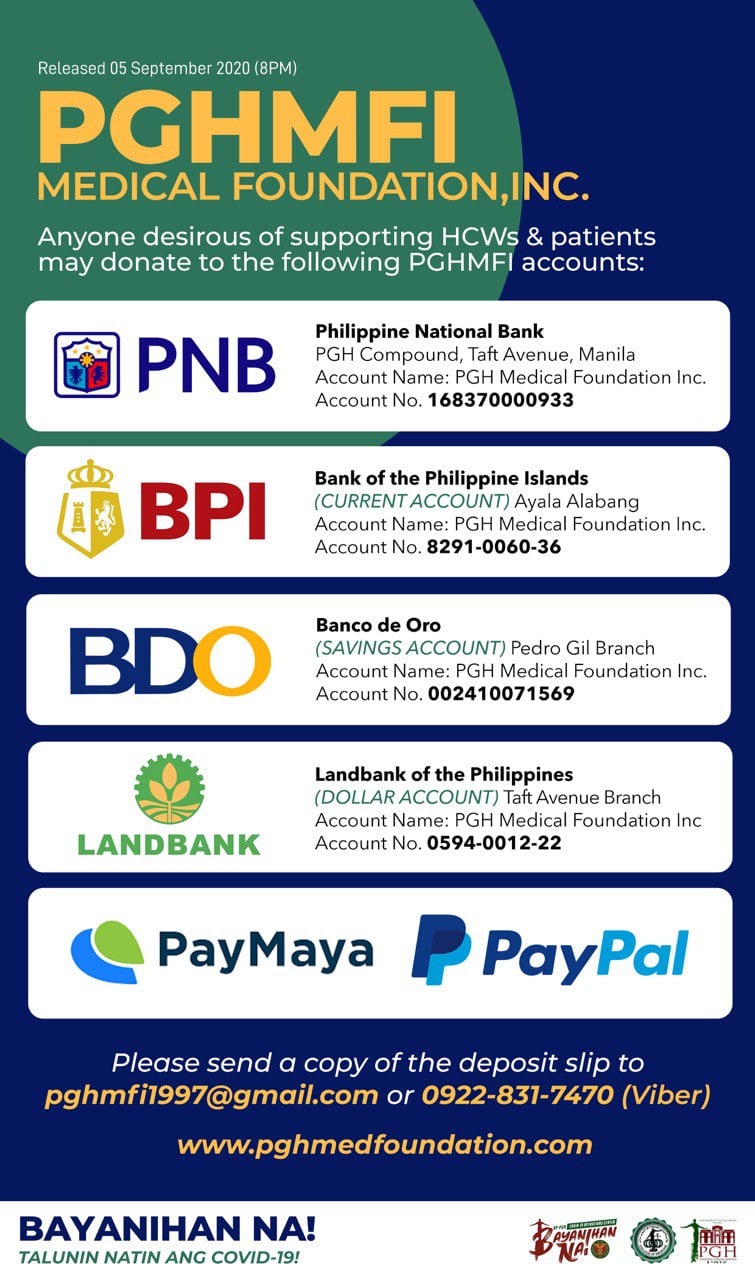